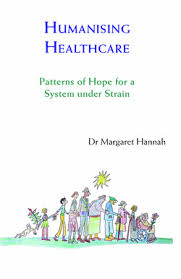 “We need to find a place again in the conversation for hope, meaning and purpose – and for Nuka” – Such is the call from experienced public health doctor and IFF associate, Dr Margaret Hannah in her new book “Humanising Healthcare”.

Published with the support of the International Futures Forum (IFF), this engaging book provides a compelling narrative for why we need to consider a “third horizon” for healthcare; one which reconstructs and re-contextualises the task and purpose of healthcare for the 21st century.

As Hannah eloquently argues: “For the last two centuries at least medicine has drawn from and contributed to a mechanistic worldview, which sees the body as machine and medicine as an episodic service to fix and repair”.  Whilst recognising that medical science has facilitated some very dramatic and valuable advances – indeed people’s lives have been utterly transformed – the approach she contends “has also generated a distinctive pattern of growth based on technical capacity”. This has led to a situation where – as former President of the RCGP Dr Iona Health puts it – “medicine was pressed to provide technical solutions to existential problems.”

Add to this the influence of the managerial discourse in healthcare over the last 25 years – especially that which is based on scientific management developed during the industrial era, often focussed on notions of efficiency, productivity and atomisation of complex problems – and it is not therefore very surprising perhaps that healthcare systems all over the world built on this foundation are struggling to adapt and respond to today’s changing patterns of dis-ease.

Obesity, addiction and inequalities in health have all continued to rise since the 1980’s. The effects of globalisation and mass consumerism continue to re-order expectations and re-imagine medical identity. The exponential growth and a radical shift in access to medical knowledge sits alongside increased contestability and a destabilisation of trust in the systems’ ability to cope.

It is in this context that Hannah asks us to consider if it is time to “raise our sights above the present horizon” and imagine alternative futures using a different and less mechanistic lens. She cites the “Nuka” system as an example.

Co-owned by the community it serves, the “Nuka” system is run by the Southcentral Foundation (SCF) in Alaska. It is built on a small set of apparently simple and yet intensely human beliefs. At its heart, the system aims to reconnect people into the web of life as the primary focus of all healthcare interventions.  Prof Don Berwick, Emeritus President of the Institute for Healthcare Improvement (IHI) and an advisor to the NHS in the wake of the Francis Inquiries, has declared the Nuka System as “probably the leading example of healthcare redesign in the world”.  Berwick continues “US healthcare suffers from high cost and low quality; this system has reversed that: quality of care is the highest I have seen anywhere in the world, and the costs are sustainable. It is surely leading healthcare to its new and proper destination.”

But “Nuka” is not just a nice, humanist idea. It produces tangible results in the areas where the NHS as currently configured really struggles.

Between 1997-2007, SCF experienced a 40% reduction in A&E services, a 50% drop in referrals to specialists and a decrease in primary care visits by 20%. At the same time overall health outcomes for the population improved and staff satisfaction is exceptional.  By producing significant improvements in quality of services, costs have reduced and demand for services has fallen. Interestingly, SCF did not set out with those objectives in mind. They did not chase the numbers nor did they set targets. They designed a system that was congruent with and supportive of their values and focussed on providing care that was responsive to the needs and wishes of their communities. They placed their beliefs and values in the foreground.

In June 2015, I hope to visit Alaska to learn more about the “Nuka” system in practice.  This work will in turn inform my work at the Centre for Innovation in Health Management at the University of Leeds, where we are actively learning from high performing healthcare systems world-wide with the aim of translating them to our own community.